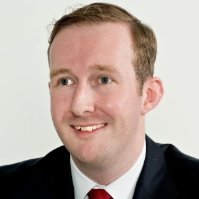 My dad owned and ran a newsagents and I helped him out from around the age of eight, doing all the sorts of things that dads get you to do, like unpack boxes and moving things from here to there.

This gave me a genuine interest in businesses and how they work, and at 16 I did work experience with his accountant. I did accounting and finance as a degree before working at Deloitte in Manchester, and later PwC. My clients included Abbey National, Northern Rock and Everton FC.

I was offered a job at FTSE-listed property company Minerva plc, a private business run by Sir David Garrard and Andrew Rosenfeld. They bought a really good property investment portfolio in London and wanted to take it public. I came in as the group accountant and it was my role to help our small team of 27 to work with the demands of being a market-facing plc with shareholders.

I really enjoyed my time there, although it was a very difficult period for the company. I joined when the share price was 405p and at its low, after feeling the affects of the crash, it was 1¼p. The world was in turmoil, but you only really learn when things are going wrong. That’s when you find out about people’s true character and integrity.

In 2009 I got a call from a headhunter asking if I’d like to talk to Colas Rail. It was a company that had grown through acquisition and was looking for a financial controller, which was my chance for progression.

I was 28 and felt ready for the job. After an initial meeting I got to talk with the chief executive for an hour. He asked me one question, and the rest was me asking all sorts of questions of him. I was initially running the property function, because of my background. The previous year it had lost £500,000 and my brief was: “Don’t lose money.” I was promoted to finance director in June 2015.

The main challenge is that we want to be successful.

We did £250m last year, we’ll do slightly north of that this year. We won a contract with Centro to operate the Midlands light rail scheme, we’re buying new locomotives from abroad, we’re growing the business into lots of different markets and planning to hit £300m next year, which would make us the size of a FTSE 250 company. That’s compared to £80m in 2008.

We’ve been through five years of coalition government, times have been hard, UK rail was under massive scrutiny, and we survived the London Olympics. It was a ‘screw up and you’re on the news’ environment, that’s what makes it all such a great success.

As FD, I have a number one role in a market-leading organisation. It’s a great honour to do it, especially at 35 because not many would have given someone my age this opportunity.

It was reported that I’m the youngest FD in the rail sector. Being young allows me to walk around in PPE without anyone realising I’m the finance director, which can be very insightful. On the other hand, people will always look at you and say, “He’s very young, can he do the job? Has he got the experience?” The only way to answer that is to work very hard, be successful and prove yourself in the role.

I learned my best pieces of advice all the way back on my work experience placement. The first is that it’s never wrong to take the profit, and the other is the importance of transparency and putting everything on the table.

It’s easy to miss your potential because you didn’t make the call. You have to be brave enough to say, “I think we should buy now,” or “I think we should sell now.” A lot of people kick themselves that they didn’t hold on for longer, but you have to have the cash in the bank. If you’ve made a profit of any kind, then you’ve done ok.

To be a successful FD, you’ve got to be a strong collaborator. People need to trust in your numbers and your ideas, that’s everyone including your colleagues, shareholders, the relevant unions. That’s why you need to be honest and completely transparent.

Your strongest relationship needs to be with your chief executive, there’s nothing quite like the link between FD and CEO in business and their need to work symbiotically. When there’s friction or misunderstanding, it can be very damaging for the business.

I like a lot of sport, it’s a great escapism for me because I can’t control it. You’re watching for the entertainment and the drama of it, and you can cheer on your team, but there’s nothing you can do to change the outcome. Sport also gets me out of the office and into the fresh air, where I find I can do my best thinking.

There’s a lot you can take from sport and apply to business. Nutrition, for example, doesn’t sound like something a finance director should be bothered about, but I work in an industry where fatigue management is one of our biggest concerns. Sports nutritionists show that you can improve your performance by 15% just by eating better, so I draw on that and ensure employees aren’t skipping meals because of time pressures.

My family is very important to me. My mum, dad, little sister and wife are all fundamental, but in my career, I probably spend 80 hours a week at work. I spend more time with colleagues than I do with anybody else, so I extend that concept of family, and trust and working hard for each other, to those around me. They all inspire me to do the best I can.